Osaka heads out for Japan’s casino development, aiming for No.1 in the country 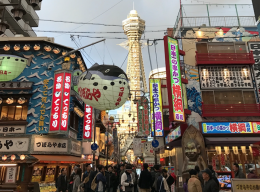 Osaka is fighting to restore their position as the Centre of Commerce through a major development project – Japan’s First Integrated Resort, and is eagerly using the promotion of the IR bill to bring the city back to its glory days. This once in a century opportunity to win back the Century of Commerce title is the rare chance Osaka has been waiting for, and the eagerness is palatable.

While there are other contenders for the IR location, the city showing most public excitement is Osaka and is the one that appears to be leading in competition.

Osaka is recognised as one of the best investment region place in Japan today, attracting the city’s advantages and IR is another additional key factor. Osaka is Japan’s second largest metropolitan area after Tokyo, where it combines the best of both Japanese historical and modern attractions. Osaka as the most active IR promoter in Japan, and if the IR project is implemented in the city, 7 million international travellers and 15 million Japanese visitors are expected to visit per year. The effect of tax revenue on economic growth in Osaka is estimated to increase to 250 billion JPY (2.2 billion USD) by improving employment opportunities to estimate of 7 million people per year.

Japan’s so-called IR Promotion Bill is fantasising many people with its new possible opportunities that can revitalise the country’s declining economy. It is like an “urban regenerator”, creating the huge opportunities for the hospitality and real estate sectors. Especially, opportunities in the surrounding areas of the new IR and there will be an increasing demand of the luxury hospitality. That being so, Osaka and other parts of Japan are ready to seek IR for both urban and economic growth.

If Osaka’s IR plan continues accordingly, then there is no doubt that Osaka will be a game changer, and its ambition to reinstate as the No.1 city in Japan will be on the right path.

Our approach in Osaka

Asterisk is also in the process of forming new development projects in Central Osaka. As we have been noticing its movement towards If IR is built in Yumeshima, Osaka as planned, there will be a strong demand for other major developments to be made in close proximity to cater to the large number of visitors the city expects to bring.

Asterisk is serving as the bridge between overseas investors and local partners seeking to develop around Osaka and other major gateway cities with IR plans by forming a series of joint ventureships for this purpose.